May 2000
Touch of Grace and Fire upon New Zealand 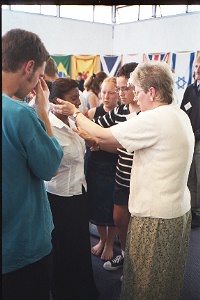 Julie completed four weeks of ministry among the people of New Zealand.  At each and every meeting, the Lord came in wonderful effusions of power and gracious anointings- to set those in bondage free, save lost people, and give them the Holy Spirit.  God demonstrated the truth of Jesus' words, Pastor Jeff Murton of Riverside Elim Church in Auckland City writes, "God is using Julie in a powerful way to proclaim Jesus in the power of the Holy Spirit". One of the most encouraging aspects of the trip was seeing the Lord call, encourage, and empower individuals for ministry.  Jeff and Sue Murton were instrumental in arranging the New Zealand meetings, and often accompanied Julie.  In Hastings, a coastal town, Julie preached at the Elim church with great results among the people.  In addition to receiving salvation, many people received inner healings in the morning service, only to return that evening to exuberantly share what God had done for them.

Auckland City Elim Women's Group hosted Julie.  Many young women responded to her message from the Word of God to step out into ministry.  A time of deep consecration in prayer followed.  One woman wrote, "The ministry time was awesome.  Many women came forward and received encouraging prayers and words. Many of us looked like we'd been hit by a train, but it was okay because the Holy Spirit was driving!!  I know that one girl was healed of rejection and past hurts.  Praise God!"

Several pastors in New Zealand asked Julie to speak at workshops on prayer ministry and other topics.  A feature of these seminars was a powerful release of the Holy Spirit on the workers to propel and empower them in their ministry within the church.  Many people testified of the moving of the Spirit upon them in powerful ways.

During this trip people were brought to Christ as Julie spoke at dinners and preached.  She was engaged in evangelism on the street.  Notably, at Tauranga Christian Centre, many thronged the front of the auditorium to ask for the Holy Spirit Baptism.  We praise God for all the people who were saved, delivered, filled with the Holy Spirit, and who received a call and anointing for ministry.

Ministry among the Pacific Island Peoples

Several opportunities opened up for Julie to preach among peoples of the Pacific Islands.  At Ramah Elim Church, a Samoan congregation, Pastor Sam Seiuli writes, "We are still amazed and so delighted in having this precious opportunity to meet you … I have seen people's hearts touched and healed in many different ways as they came up front for prayers."

Because of contacts like these there are now opportunities for the Youngs to go to Samoa, the Philippines, and to Papua New Guinea.  Julie and John need your prayers and your financial support to make this a reality, and to continue taking the gospel to the nations.

It is impossible to visit New Zealand and not be impressed by the stunning, rugged beauty of this land.  Semi-tropical climate, lush vegetation and hot, sunny weather greeted Julie as she traveled around the North Island.  The Pacific ocean (it is incredibly blue!) is never far away, prompting early settlers to the region to call the land "God's Own Country".  New Zealand ranks near the top of countries in sending out missionaries on per capita basis.  The people here call themselves kiwis, laid-back but peppered with legendary ingenuity and grit.  We believe that the Lord has called and graced this nation to play a special role in the 21st century for Jesus Christ.

A Footnote From Julie

"The trip to New Zealand was characterized by precious outpourings of the Spirit on men, women, and young people.  The prophet Joel indicated that the days in which we live are the last days, and that effusions like we have seen here would occur (Joel 2:28 ff.) At one church, after an intense time of ministry, I was asked to pray for a Tongan evangelist.  As the Holy Spirit met with him and spoke clearly to him, this brother fell as if electrocuted.  I have never seen the like of it.  At another meeting, the Spirit spoke to me to ask a Maori man to come forward that I might pray for him.  In prayer, the Lord showed me that this man was called to preach the gospel to his people.  When I spoke to him what God was revealing to me, this man began to cry, nodding his head in agreement.  I could feel his tears falling on my hands.  Then God said to me, "Tell him this: 'The canoe is a symbol to your people.  God says, you will get many people into His canoe.'" As I spoke these words, the man broke down and wept.  God had sent a woman 12,000 miles from America to confirm His love and plan for the Maori people.  They have often been misunderstood, but the Maori are beloved from the standpoint of the gospel.  I thank God for the many times pastors, workers, and I prayed for individuals and saw the hand of God come upon them."

Yours Aye in Christ - On to Scotland

Frank Hartley, our good brother in Glasgow who is also a radio presenter for Revival Radio, always signs his messages, "Yours Aye in Christ", a Scottish way of proclaiming a vigorous faith.  Julie and John will be traveling to Scotland in June to minister to the people of this beautiful land.  Please lift this mission in prayer.  The Youngs will be in meetings and evangelistic dinners in Aberdeen, Edinburgh, and Glasgow.

Julie and John will be guests on Revival Radio, and the RealHope Radio program will be aired.  Generally there is little freedom in the UK for Christian broadcasters.  Revival Radio may only broadcast for 28 day periods during any given year, and many restrictions hinder Christian programming.  Pray that God will break this hold over the airwaves and that the gospel may be free to proceed through the efforts of stations like Revival Radio in Glasgow and MFJ Radio in Edinburgh.  Pray also that the broadcasts will bring many to Jesus Christ.

Thank You to all who have prayed for our daughter Jessica, and have written or phoned to tell us.  Keep praying!  God is working, and she is doing better physically.  We thank you for your prayers and financial support.

Invitations to Other Countries

In the first year of the Millennium, the Lord has reemphasized to us "go ye … into all the world." Many doors stand open and wait for us.  We have invitations to go into countries to minister the good news that Jesus is the Savior, Healer, and Deliverer.  India, Pakistan, Germany, Uganda, Samoa, the Philippines, and Papua New Guinea are beckoning us to come.  John and Julie are looking for the right door at the right time, as God directs.  There are millions waiting to have a gospel presentation for the first time.

In India, a country of ONE BILLION people, less than ten percent have ever heard the story of Jesus.  We need your partnership more than ever.  Your monthly support would speed Julie and John in taking the love and the Word of God to needy people.  Won't you consider becoming a partner with us in sharing the good news with the world?

Write us today at:

On April 28 and 29 of this year, Julie and John attended the New Life Christian Fellowship National Conference.  It was held in Alton, Illinois, part of the St. Louis metroplex.  Julie was invited to address the Conference and preached on Saturday morning.  There was an evident anointing on the business sessions and the meetings.  Dr. Loren Wooten, founder and president of NLCF, remarked that the annual conference was the greatest to date.  Each speaker emphasized the need to move out from the confines of the church and into the marketplace to reach the lost.

For over ten years, NLCF has been developing in the U.S. and expanding into countries overseas.

Oh "Sweet Hour of Prayer"… it's more than just an old familiar song.  Our time of prayer should be like sitting down at the dinner table and sharing a meal with a friend (God), talking about all the cares of the day and the plans for tomorrow.  Prayer isn't just our telling God what we want or need. It's sharing the things that are weighing on our heart and asking for His intervention and guidance.  And most important in this time of prayer is the time we sit and listen for His instructions, His orders for the day.  Prayer is not just a one-way communication, it's having a conversation, an exchange with our heavenly Father.

Several years ago, when the Lord was teaching me some things about prayer, I could easily spend an hour rattling off the things on my list.  But one day He spoke up and asked me, "I've just listened to you for an hour, are you willing to listen to Me for the same amount of time?" I said "Yes, Lord," and began to quiet myself, expecting to hear Him share some nuggets of His wisdom.  It was hard for me to not start singing to myself or praying in the spirit, but to keep still and listen.  The minutes passed and I listened, but heard nothing.  At the end of the hour, the Lord spoke and said, "I wanted to see if you would be still and listen.  Thank you." That evening began a new aspect of fellowship in my prayer life, one that centered on giving God equal time and on the realization that He did want to carry on a two-way conversation with me.

So many times we come to God with our needs and requests (and this we should do), but we are just so quick to say Amen and get up and start back in with our daily stuff.  Next time you find yourself before the Lord, say, "Lord, I thank you for hearing me when I pray, and now I want to be still and listen for You to speak to me."

From the prayer closet, John Young

Julie's husband, John has worked as an electrical engineer for the past 25 years to support their family and the ministry, and has always been a part of her ministry.  He ministers in music and provides prayer support, as well as being the technical coordinator for YMG. Did You Know? This page was last updated on 26 November 2009.