Julie traveled to England and Poland during the months of October and November 2000, where God visited the churches and the people with demonstrations of His presence to save, heal, deliver, fill, and restore.  It was a divine visitation.

Julie spent the month of October in the south of Great Britain amid the terrible flooding there.  But it was a fruitful time as the Lord backed the preaching of the Word with powerful confirmations.  People responded to be saved and filled with the Holy Spirit as well as being set free in body, mind, and spirit.  Many people were subdued by the power of the Lord, lying on the floor for long periods of time as God visited them.  Great prophetic anointing flowed in every meeting.  There were remarkable healings: A woman in a church in the coal valleys of Wales came for prayer with severe pain in the right side of her face.  The doctors had told her they could do nothing.  She was instantly healed as Julie laid hands on her.

Another woman from South Africa was healed of painful stomach complaints she had endured for 30 years.

Pastor Ian Alderson of Gosport, Hants. reported a triple healing that occurred in 1999 during Julie's visit.  She had prayed for a man who was going cold turkey from heroin addiction.  He was instantly delivered, and did not have to continue in detox Julie had also prayed for his lungs, and he was instantly healed of emphysema.  His third healing came as he accepted Jesus as his Savior. We glorify God for all He has done.

In Mid-Sussex Christian Centre, the Holy Spirit came powerfully.  Pastor Graham Field interrupted the meeting to ask Julie to come to the front and pray for the church.  As she responded, the Holy Spirit rushed in anew and the gifts of the Spirit flowed.  Julie prayed for over two hours for people.  She was also asked to preach at the International Bible Training Institute in Sussex to students representing countries from all over the world; and at the School of Evangelism at Marilyn Harry's Ministry Headquarters in Newport, Wales.

There is not space enough to tell of all those who were healed in their emotions, or of those set free from mental torments and demonic bondage.  We thank God for the great outpouring of His Spirit.  Pastors were anxious to have Julie return for longer meetings, which she has agreed to do in March of 2001. 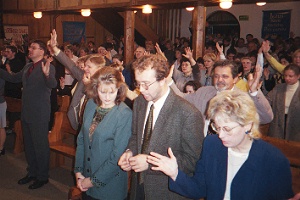 Pastor Lezsek Mocha of Christian Life Center in Jastrembie-Zdroj, Poland welcomed evangelists Julie Young and Gloria Kramer for a week of preaching and ministry. The time in Poland was characterized by prophetic unction and strong preaching, with the result that many, many people found freedom because of the Lord.  At various meetings, the Lord spoke and confirmed the Word with a display of power as Julie prayed for those bound by alcohol, mental oppression, sickness, emotional turmoil, and other afflictions.  The authority of the gospel was applied with great effect.

There was great spiritual hunger among the people.  While visiting with several families in a home the power of Jesus literally fell, suddenly, upon the house as Julie and Gloria began to pray.  People fell to their knees, weeping, and cried out; they fell under the Lord's power.  The trip to Poland was clearly characterized by the rush of God's Spirit upon those hearing the Word.  At a house meeting, Julie spoke intently about freedom in Christ.  Among many who received that night was a woman with a heart problem.  As she responded to the word from Julie, the Lord powerfully touched her, body and soul.  A man and his wife were saved and dramatically delivered from alcohol and demonic bondage.

Hundreds of people heard the Word of God and responded to be set free by the power of the Holy Spirit.  Julie stated, "This is the triumph of the cross -- seeing people come free at the name of Jesus The incredible joy on their faces showed that Jesus had broken the chains that held them.  I wish every one of our partners could have witnessed the dramatic transformations we saw."

On Sunday morning in Jastrzebie-Zdroj the church meeting was full of the conviction of the Lord Jesus.  In response to Julie's appeal for soul winners, the entire church rose to their feet.  Polish church leaders have asked Julie to return next year to preach evangelistic crusades in several cities, and to speak at the Polish Pentecostal Church national women's convention.  Praise to God for these open doors.

The bonny land of the Scots welcomed Julie and John in June 2000.  They ministered in the cities of Edinburgh and Aberdeen, and in communities near Glasgow.  Wherever Julie preached, people responded to God's Word.  John often ministered in song and exhorted the people.  The Youngs also appeared on Revival Radio with presenter Frank Hartley for three hours of talk and music.

The Lord moved in each church meeting, house group, and evangelistic dinner to meet people in their need for Christ.  Several made first-time decisions for Jesus.  In Kilsyth, the Holy Spirit visited in a Congregational church.  After Julie preached, 15 people came for prayer to receive the Baptism in the Holy Spirit.  Many others were touched by God's power.  In such a beautiful land, the Word of the Lord went forth to do its work.

When near Glasgow, Julie and John visited the home of David Livingstone, the great Victorian pioneer missionary to Africa.  The house is now a museum that tells the story of the man who captured the imagination of a nation as he did exploits for God.  The Youngs were blessed as they gave to a nation that has given so much to the world and to the kingdom of God.

Uganda, East Africa.  A man born here will die at 36.6 years.  Statistics deliver the facts on the average lifespan.

Eternal Life.  John 3:16 tells Uganda God's desire for the life of the average man: forever, in peace, in relationship with Him.

In May 2001, Julie will be in the capital city of Kampala, preaching evangelistic meetings, teaching a pastor's school, and ministering in an area revival at the invitation of Pastor Patrick Musoke.  She will be preaching the good news of eternal life.  Julie will be supported by a ministry team and a small medical team.  The medical team will be headed by Marge Cook, PA-C, of Kettering College of Medical Arts.  Pray for Julie and the team to meet physical and spiritual needs in this city of a million people.

Please pray for God's will to be done through this ministry.  Pray for the people of New Zealand, Samoa, Australia, Uganda, Poland, and Great Britain to receive salvation, healing, and life.

And to the many other special individuals who make our work possible.  Your prayers are what opens the heavens of God - and your financial support sends the messenger.

If you, your church, or organization would like to become part of this world outreach in financial support or in prayer, or if you wish to schedule Julie for a meeting, please contact the YMG office.